Archmagus Mod 1.8.9, 1.7.10 adds numerous spell books to the game, turning you into a powerful archmagus. Obliterate your foes with mighty fireballs, overwhelm your enemies with the armies of the undead, or teleport around the battlefield like a mad wizard: everything is possible with Archmagus. 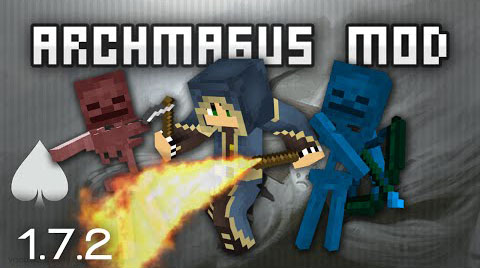 Spells books are currently dropped by mobs, and are relatively rare. You can browse through the spell list further down in this post to find out exactly what mobs drop what spell books. Some spell books that share the same spell can be combined using an anvil to create more powerful versions of them, similar to enchanted books.

A showcase of some of the spell books and the mana bar.

Spells require mana in order to cast them. Mana regenerates slowly over time. New players start with no mana at all, but can increase their maximum mana up to 20 by eating Crystalline Apples. These are crafted using Mana Crystals and normal Apples. Besides being used for increasing a player’s mana, Crystalline Apples can also be used together with Awkward Potions in the brewing of Potions of Mana Surge, which restore mana every few seconds for a certain duration. Similarly to vanilla potions, Potions of Mana Surge can be amplified, extended, and turned into a splash version using glowstone, redstone, and gunpowder, respectively. See below for some screenshots.

The crafting recipe for the Crystalline Apple.

The crafting recipe for the Mana Crystal Block.