The Better Dungeons Mod 1.7.10, 1.6.4 by Chocolatin is a really expansive Minecraft mods that add new mobs and expansive dungeons to the regular Minecraft biomes. These dungeons range from Pirate ships to volcanoes and really add a sense of depth and adventure if you’re feeling tired of vanilla Minecraft. 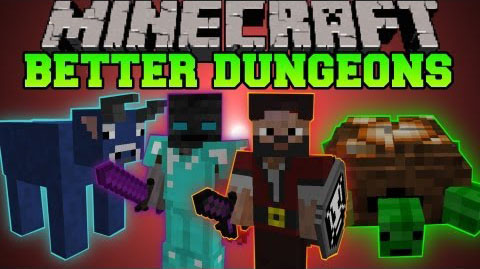 Volcanoes, stay away from the core, or not…

Siege castles to get settlements for your travels! Look for them in plains.

The mod comes with little ships templates, a big galeon and a treasure island.

Strongholds, try to find the entrances at taiga biomes.

And thats supposed to be under the towers:

Swamp caves are very big, and with some flowers!!

If you see a pyramid(or something suspicious in deserts), go in, look for the trapdoor in the maze and jump in to fight the boss:

Look for this caves in wet biomes to find the slime boss:

A default dungeon (In the download version dungeons will be at layers 18-60, this was just for testing)

A big one (size configurable in properties, look top)

Human-like mobs:
“Human” mobs, they look human like, type depending in biome.
There are different classes:
Armored: scales their hp and attack depending on the dificulty and the armor/weapon they wear.
Basic warrior: basic close combat unit.

Grenadier: medim ranged unit, equipped with a sword and grenades.

Healer: equipped with a healing staff will heal hurt mates!

Defender: with sword and shied, specialist in defense, while blocking they take reduced damage and reflects arrows.

Hookman: equipped with a hookshot, will try to pull away targets launching the hook.

Berserker: Equipped with a big sword, be careful with them at close range.

Ninjas: equipped with a dagger, deal extra damage from behind. Watch your back!

Bannerman: equipped with a banner. Not a big deal alone, very dangerous in groups. Gives speed, attack and defense to nearby allies.

Bosses:
Spider boss: you can find them in jungle caves.
Necromancer: its the special of the skeletons, live in castles, its protected by an horde of skeletons. Have 3 diferent attacks: normal attack its a basic mele attack, cause confusion; Vampiric ball, a proyectile, heal the caster if the ball collides with any entity; Summon skeleton, summon a skeleton near him, the damage the skeleton does its returned to the necromancer as health.
Liche: a semi-death necromancer who gave his life to dark rituals, there creatures are dangerous, have more powerful versions of the necromancer attacks, and extra spells.
Pig mage: a mage pigman, have more powerful versions of the necromancer attacks, and extra spells based on fire.
King pirate: the king of the pirates, open your eyes fighting him, he will trick with your vision.
Other:
The Exterminator prototype: its one of the biggest secrets of dwarves, you can find it at the end of their dungeons. But it is a prototype, may not work very well.
Walker boss: an expert defender and hunter. Attacks with small tornadoes, and his sword. Also have a powerful shied capable of block most of the damage if its blocking. Don’t aproach if you are not sure you can beat him.

Revolver: can be found in dungeons. Shoots bullets
Bullets:

Golden feather: Can be crafted or inside dungeon chests. Prevents falling damage.

And more to discover!