The mod is CameraCraft Mod 1.4.6, and already noticing by the name, you know this has something to do with cameras. If you thought that, you are correct. CameraCraft Mod allows you to take pictures, film your buddies, and share ’em. 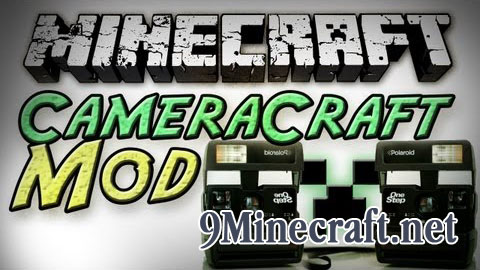 The first thing you should craft on your journey through the world of CameraCraft is a Camera.

This will give you a normal camera, which works with films (see below).

To take a photo, open the camera inventory by performing a shift-right click with the camera in your hotbar. Then put a film in and close the inventory. Find a nice spot and do a right click to take the photo (You can also use the p-key on your keyboard for historical reasons. That key can be changed in the normal Minecraft Controls).

If you want to be a bit more fancy, you can try the digital camera, which works with a memory card instead of a film:

The Digital Camera has a few advantages over the normal camera:

If you want to take photos with a digital camera, you first need to craft batteries, which is done like so:

This will give you a Battery with a power of 1 volt. You can increase the voltage of a battery up to 9 volts by adding Redstone dust to it:

The above example will give you a 3 volts battery, which can then be turned into a 5 volts battery and so on.

Each volt of a battery means you can take 1 photo. In the digital camera you have a counter, how many photos you’ve left with the current battery (after that, the camera will take a new battery from the stack).

Memory Cards are required for the Digital Camera. Craft them as follows:

There are 2 types of films, the colored film and the black and white film. You craft them like so:

Their function is to serve as storage for photos taken with the normal camera.

To view the photos, you first need to process the films with the Photo Processor:

The photo processor is used to convert films that are filled with images into Processed films which can then be printed. To use the photo processor, put in a film with photos on it and a bucket of water (you can also put in lava or milk, but that won’t work )

The Photo Station is one of the most important blocks. It is used to print out your photos onto paper. To use it, you put in either a memory card or a processed film. Click on the button with a photo on it, to select the photos you want to print. A screen similar to the following will show up:

The small button on the left (red cross / green tick on it) selects if you want the currently shown photo to be printed. On the right you can select how big your photo should be (maximum is 4×4 Blocks). Right beneath the “Print”-Button you can see how much paper your current selection will cost. Click the Print-Button to start printing.

The photo station also has a small inventory for paper and ink. Each photo will use up 1 yellow, 1 cyan and 1 magenta dye and 1 piece of paper for each block the photo covers (e.g.: A 3 by 4 photo will use up 12 paper). The printed photos are also added to the inventory. The photo station also looks for adjacent chests and uses their inventory as a possible paper and ink supply or a place to store finished photos.

Each photo has some properties that are stored with it:

To view these properties and the photo itself, just perform a right click with the photo in your hotbar. If you are the owner of that photo you can also rename it.

If you want to place a photo on the wall, you need to turn it into a poster:

When you right click a poster placed on a wall, the same screen will show up as if you had right clicked with the photo in your hotbar.

Both posters and photos can have a teleportation effect, which is achieved by combining them with an enderpearl in the crafting table. That will give them a glowing effect and when you right click with them, there will be a teleport button (enderpearl on it) that will teleport you to where the photo was taken.

In survival mode you need a so called “Teleportation Battery” to teleport using a teleportation photo. See below for more info.

When a teleportation photo is placed on the wall, you can “walk through” it.

A teleportation battery is needed to teleport using a Teleportation photo. Each battery has 10 uses, and they can be stacked up to 16. Just place them anywhere in your inventory, like you would with arrows for bows.

Another option (especially for server owners) is to use a Teleportation Enabler:

Tripods can be used to take photos of yourself or to create a timer. Craft it like so:

You can place cameras on it. When you power the tripod with redstone, the camera will take a photo.

Please note that this is still in development and might have bugs. Also you can’t open the inventory of the camera when it is placed. You need to pick it up. That will be changed later.

You may have noticed the additional slot in the camera inventory. You can put photographic filters there which will filter specific colors and let the photo look different.

Start with a transparent filter:

You can dye this transparent filter by adding yellow, blue, red or green dye to it. More filters are planned!