Well, Chat Macros Mod is a mod that allows you to put in codes into the chat and have them be parsed into something, you can define that something in the configuration file, but what’s so good about it is that you can get variables into the parsing, so typing in, for example, xpos will put in the chat your X coord, the list of keywords can be found in the information section.

It also adds in a quick fix that makes the chat pane not instantly close when you finish typing (this can be changed).

“{macro}” is considered a macro.

In the cfg you’ll find a section to put your own macros, you can really put them anywhere, but it’s better to put them there so you can find them easier, here’s an example macro:

So, with this macro, if you type in {macro} you’ll send “This is an example macro.” and the rest of the server will see it like this.

There’s also variable codes, that get a specific thing in the game and add it to the chat, these are indicated with the ¿ character, so as they don’t interfere with your everyday chat, here’s the list of variable codes:

(Note, you can also see the codes in-game).
Spoiler:

So, if you were to make this macro:

Typing &para; in the macro will split the message in various messages at that point, keep that in mind when making long macros.

The {macros} macro is prebuilt, and will send a list of your macros, this is client-sided so you don’t have to worry about spamming the server chat.

The {reload} macro, that is prebuilt as well will reload the macro file so you don’t have to close minecraft to change the macros.

The {add} macro, that is also prebuilt, when used will open a GUI inside the chat GUI that will allow you to add macros in-game, it also opens up some buttons, one of them opens up a GUI where you can see the chat codes in-game.

The {help} macro, yet another prebuilt will allows you to see what a macro does, so for example, let’s take in consideration the layer macro from earlier, if you typed in {help’layer’} you’d receive this message: “layer » I’m at layer ¿ypos.”, this is also client-sided. 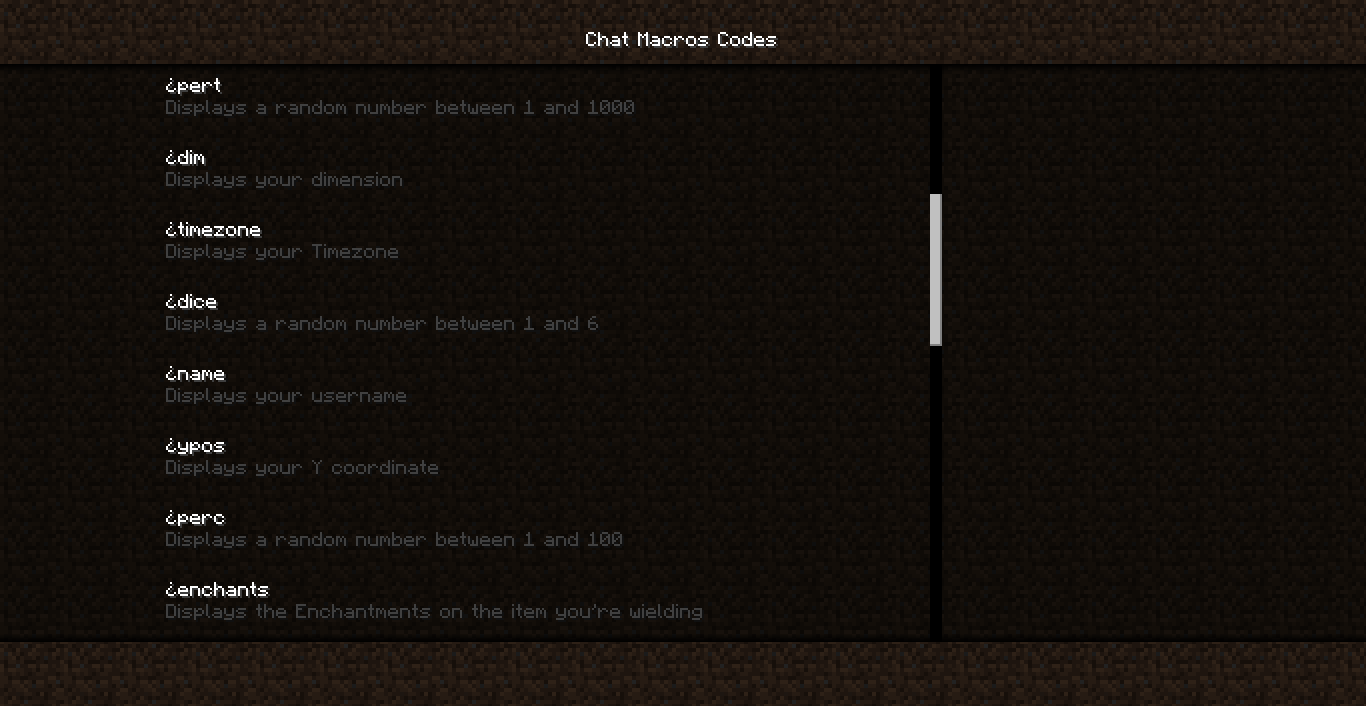 The Configuration file for this mod is located in /.minecraft/vazkii/config/chatmacros.cfg, it will only be there after you installed the mod(and Vazcore) and ran the game at least once.