Good Seed for Survival and Builds A good seed for survival and builds, it has a small village with basic survival needs such as a forest, a snowy taiga biome, and a stone beach for early game stone and builds. The gold and diamond blocks are the spawn point. 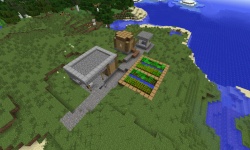 The village. It has a blacksmith with five apples, two bread, one iron ingot, one iron sword and one iron pickaxe. The village has a single farm with 4 sectons. there are two wheat sections, one potatoe section, and one carrot section. There is also a well and a small house. 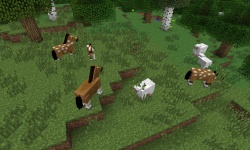 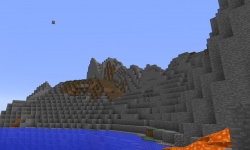 There is a stone beach in near spawn, with a small lava waterfall, and tiny lone block in the sky. It is good for early game stone collecting and for builds.