Little Helpers Mod is an automation mod that navybofus has put my own “spin” on. The “spin” is that if a vanilla task in Minecraft requires items, then so will this mod’s automation process. Further, this means that if a tool is required for the mod’s “LittleHelper” to function, the tool is also damaged as it would if you were to actually carry out the task manually. So, what is the purpose of this “spin”? He finds that adding a diamond tool to the recipe of an automation block, over time, adds a cheating aspect to the game. Mods are what they are and some, even a few of my own, do add cheating characteristics. This mod tries to add automation by cutting out the time required to do a task, but does not cut out any materials that would be consumed. Note: By itself, this mod cannot create full-time automation without the player’s occasional input. This is on purpose. Also, if a mod task requires an item that isn’t normally required by vanilla Minecraft, it is intentional for balance.

So far, this mod adds automation for:

Here are the blocks that do the tasks while you’re out an about. A tool and item requirement table will be provided below for reference.

Like all the mod’s blocks, the name hints to the task the block will carry out. In this instance the Fisher will fish for the player. However, this block differs from the rest as it will produce fish faster depending on the number of two-deep pools of water in it’s immediate area (maximum of 9).

This block will plant and harvest the vanilla “small” crops like Wheat, Carrots, Potatoes and Nether Wart. With the 1.3 update there is a configuration option available to extend the radius by one square with more than triples the amount of crops maintained by this LittleHelper. As of 1.4 the crop farmer will skip all non-vanilla crops.

This block will plant and harvest the vanilla “big” crops like Pumpkins and Melons.

This Sapling Planter block plants Saplings. Yep, that’s it. As of the 1.3 update, this block will now plant the Saplings in a 3×3 area one block in front of this blocks “facing.” This will allow for 2×2 sapling trees to grow.

Ah, a reason for the Sapling Planter! The Tree Cutter block detects trees in a (as of 1.4) 13x13x35 area of which it’s “pointing” to harvest. With the 1.3 update, a configuration option allows the player to choose if the Tree Cutter will use Shears or an Axe to cut leaves. But, as of 1.4 if the noShears option is enabled, the player will not receive Leaves or Vines.

This block detects a pair of eligible (see mod description above) Animals in a 5×5 area of which it’s “pointing” to feed and subsequently breed. With the 1.3 update, the breeder will follow a capacity guideline set within the configuration file. Breed a little, or a lot!

Both of these machines are real-world inventions that crush rocks into smaller rocks and extract fine metal ores from sand.

Only the Metal Extractor requires a tool (found in the Items section below) called the Extractor Magnet.

The Crushing Mill requires any of the following types of rock: Stone, Cobblestone, Gravel, Mossy Cobblestone, Sandstone, Stone Bricks or Netherrack. Depending on the type of stone that is being processed, the completion time will vary. For example, Sandstone takes a short time to crush versus Stone or Stone Bricks taking much longer. The processing is a tiered system as the bullets below represent. With the 1.3 update, a configuration option has been added to allow speed adjustments (from 1% to 200% of the original time) for these machine’s processing time.

As of 1.3 the Breaker comes into the scene to facilitate the Crushing Mill and subsequently the Metal Extractor. Hook this bad boy up to a Smooth Stone or Cobblestone generator and watch the magic happen.

As of version 1.5b (fixed in 1.5) we get the Farm Hand. This LittleHelper will collect various items from adult animals in a 5x5x3 area.

The Extractor Magnet is an item required by the Metal Extractor to extract the Ores from the Sand. This item has 320 uses before breaking. As of 1.2 the Magnet can be enchanted with Unbreakable.

As of the 1.3 update, the Redstone Oscillator makes it’s appearance as a “Hard Mode” recipe item that will take the place of all Redstone Blocks while crafting the LittleHelpers. This item currently has no other function, and has no planned future functions.

This new mod item works as vanilla shears do, but has 500 durability for a higher recipe cost. 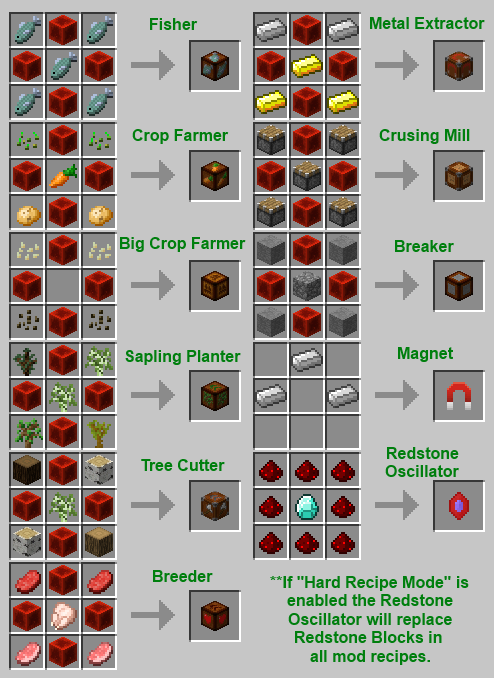 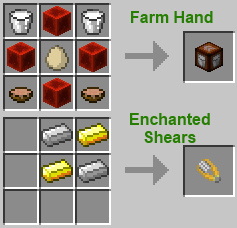 Little Helpers Mod How to install: