What Mithril Mod does?

Mithril is not a fantasy metal. It was first introduced by author J. R. R. Tolkein in his book “Lord of the Rings”. Actually that book was a sequel to “The Hobbit”. In real life the author was a professor of history and linguistics. He was such a history nerd that he made other history professors look like amateurs. He was fully aware of the history of bronze. The form of bronze used in the Middle Bronze Age was copper arsenic alloy, often with copper antimony alloy added. After the Stone Age, people used copper. When all deposits of copper ore that could be reached by hand tools (pickaxe) were depleted, people looked for a new source. They found an ore that produced copper, but it had something else in it. The result was stronger, tougher, harder, and more durable than pure copper. And it didn’t corrode or tarnish. Great! So they used that. This was the beginning of bronze. The catch was smelting produced a toxic gas, so you have to smelt outdoors and stand upwind. They later discovered if you combine copper with tin, it makes bronze without the toxic gas. This was used in the Late Bronze Age. This was not a better bronze, in fact it was weaker, softer, and would tarnish. Softer means tools and weapons got dull more quickly. This was cheap crap, but smiths would not poison themselves. After generations, people forgot how to make the good quality stuff. Tools made of the old bronze were prized, this metal became “mythical”. That’s why J. R. R. Tolkein called it “Mithril”.

Today we know that type of bronze as arsenical bronze. Instead of copper/tin alloy, it’s copper/arsenic. The result is tougher, stronger, and the arsenic prevents oxidation so it never tarnishes. Copper/antimony alloy forms in the same conditions, so tends to form in the same area. Antimony makes any copper based alloy hard. With enough antimony, it becomes harder than tempered steel. And with enough alloying metal, bronze becomes very pale, almost silver in colour. This matches the description from Lord of the Rings.

Ore: copper/arsenic ore is tennantite. It has sulphur and some carbon, burned off during smelting. It’s green, the colour of a copper statue that’s been corroded by weather. Tetrahedrite is copper/antimony ore. It’s dark blue, but the colour can be altered by impurities like iron. Both ores occur in geothermal vents, so where lava and water meet. And the ores tend to form together. Antimony is more rare than arsenic, but for simplicity we’ll ignore that. Also for simplicity, ore generated in game will be pure. These have to be smelted, then alloyed together to make mithril.

Tennantite ore will generate with the same rules as iron ore. An ore of tetrahedrite always generates near tennantite, so the total number of blocks could potentially be twice as much as iron. But there’s a check, to generate there must be both lava and water near by. This makes the ore rare. Images are an attempt to match the real ore: 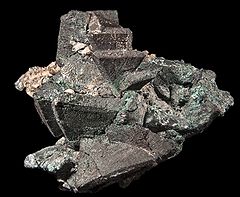 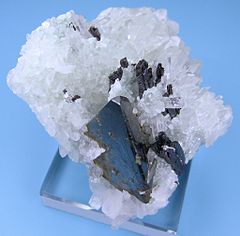 Each ore is smelted to produce bronze: arsenical bronze, and antimonal bronze. These can be used to make armour, tools and weapons directly, but that’s a waste. Put an ingot of each on the crafting table to make a pair of twisted bronze ingots. Then smelt that to make mithril. Bronze is weaker than iron, Mithril is stronger than iron.

The colour of Mithril is taken from the image of a real bronze bell. This has 20% alloying metal (arsenic/antimony), only 80% copper. The handle is normal bronze, but the bell itself is Mithril. I used the eyedropper tool in GIMP.

The reason ancient people stopped making this type of bronze was the toxic gas, not any superior quality. So this is a major feature. Tennantite and twisted bronze contain arsenic, so when you smelt these the furnace will produce toxic gas. The gas uses the same game flow physics as water, but flows up. If you step into the gas, you will get poisoned. In real life, eating a food high in sulphur will increase the rate you urinate out arsenic. (The 4 letter word for urinate was deleted.) A formal medical study (published on PubMed) found garlic increases the rate 45%. So this mod adds garlic. Eating a clove of garlic will instantly cure poison. It was too hard to separate arsenic poisoning from any other poison, so garlic cures all poison. But unlike milk, garlic will not clear all potion effects; just poison. So if you drink a beneficial potion like strength, speed, invisibility, etc., eating garlic will leave those in effect. This alone is a reason to get this mod.

Garlic will grow wild in grass, using the same generation algorithm as pumpkin. Harvest to get a garlic bulb. “Break” the bulb on the crafting table or crafting box to get several cloves. Eat a clove to cure poison. Or plant a clove in tilled soil to farm garlic. When mature, garlic will have a purple flower. In real life you harvest garlic just before the flower forms, but I need something to indicate it’s ready to pick. So in game, pick when the flower forms.

The title image above shows a player wearing full Mithril armour, holding a Mithril sword, and standing in front of a garden of garlic.

I also added arrow heads. You can make arrows with Mithril instead of flint. It forms a normal arrow, but useful if you’re short of flint. This also works with iron, or antimonal bronze (the hard bronze), but not arsenical bronze.

How to install Mithril Mod for Minecraft: