Mob Lure Mod 1.7.10 currently adds one entity, a stone totem that will attract all passive mobs around it. The totem has a range of 24 blocks both ways in the XZ direction and +2 in the Y direction. It works on all passive mobs including ocelots and horses and leaves aggressive mobs alone. It also randomly and naturally lures mobs in, not all at once. Much easier than a water collection system for mob farms! It also will automatically breed animals that get close enough! 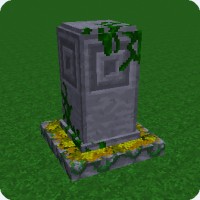