Phain: Game Board of the Ancients Map

“Eons ago, Phain was just an ordinary continent. Meanwhile in a distant land giants raised to power. Those mighty monsters enslaved humanity and all creatures that were unable to defend themselves. The giants were hungry for entertainment, so they arrived to Phain with a goal to construct here arena for their amusement. Here they carved lakes and moved mountains until the entire land turned into game board for their violent games. After all work was done, the giants forced humanity to settle in Phain. Decades have passed, beautiful towns, villages, mines and roads arose from the wild. The life in Phain was perfect and peaceful until Giants returned to start playing their bloody game. The war sparkled in all kingdoms, humans became pawns of the giants in their strategic game of chess on the enormous board. No figures on the board survived those games. Only death remained. Eons have passed. Phain is now completely forgotten, nobody lives here or remembers the old days. Only winds whisper screams of the long forgotten wars.”

Phain: Game Board of the Ancients Map Features: View on the entire mysterious continent. Blue Ice is the coldest region. by Splekh Autumn trees are common in the Blue Ice region. This is well known anomaly. Red Sun is the hottest region of all. by Splekh.

It has giant coral reefs. Yellow fields is the most unnatural looking region. by Splekh. This is how it looks from the sky in the morning. 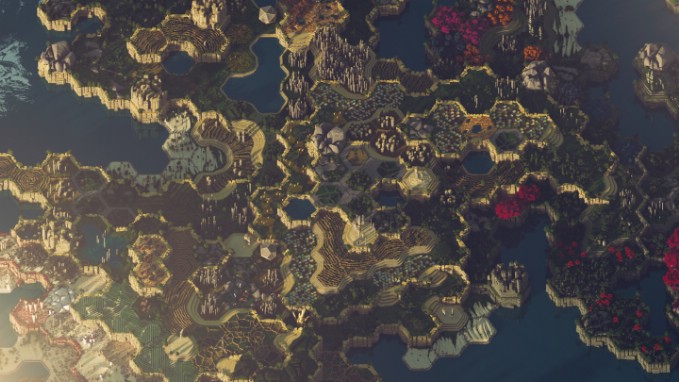 Almost everything in this region was made by ancient magic. So green and alive. This is Green Leaf region. There are so many forests, swamps and groves that it is easy to get lost here. A lot of places to explore. Legends say that ancient stronghold was built here somewhere. The obelisks are showing the way for The Lone Wanderer. Soon he will depart. His home is near. Download link for Phain: Game Board of the Ancients Map: