Colorful Mobs Mod 1.7.10 aims to diversify your Minecraft world through the addition of a new and simplistic color mechanic. This new color mechanic allows all entities to be given altered color properties, which will change how they appear in game. Colorful Mobs uses the RGBA system for coloring mobs, which means players have access to 16777216 different colors, along with a varying degree of transparency. Dye Powder: Dye Powder can appear in any of the 16 777 216 RGB colors. When used on a mob, the color effect will be applied to that mob. By default, when a dyed mob is killed, it will drop a Dye Powder which represents the color that mob had, that color can then be applied to another entity. Any of the sixteen vanilla colors can be made, simply combine string, paper and a dye, as shown below. This recipe can also use most dyes from other mods. Pure white dye can be used to restore a mob to its natural colors, and for making a copy of a non-white dye. To copy a colored dye, simply put it in a crafting table, along with another any number of pure white dye powder, this recipe is shapeless.

The Rainbow Dust is a special variant on the the normal Dye Powder. When Rainbow Dust is used on an entity, it will color the target mob in a random color. The rainbow dust can not be crafted, however it can commonly be found in dungeon chests, stronghold libraries, desert temples, bonus chests, and the jungle temple dispensers. Rainbow Dust is an essential item for creating and repairing the Color Wand. It is possible to change the possible chest locations in the configuration file, along with the weighting of the rainbow dust, which is 10 by default.

Ghost dust is another variant on the normal Dye Powder. When Ghost Dust is used on an entity, it will change the transparency of that mob, making it see through. Ghost dust can be crafted using the standard dye recipe, however it uses Nether Quartz in place of a dye, and produces only one.

The Data Checker is a utility item which can be used to check information on a specific entity. Simply right click on the entity you would like to check, and a message will be sent to your chat containing the Red, Green and Blue value, along with the Transparency and the entity name. While the entity name may seem a little out of place, it is used by the configuration file and will likely be a very useful tool to help those configuring the mod.

The Color Wand is a powerful item which allows the user to set a specific color to any mob in the world. This item allows for the Red Green Blue and Transparency of the target mob to be changed. This item can be crafted using rainbow dust and a normal stick. Color Wand has a durability of 16, one durability will be used, every time the player right clicks on a mob. (even if they chose not to set a color) The color wand can be repaired using Rainbow Dust. 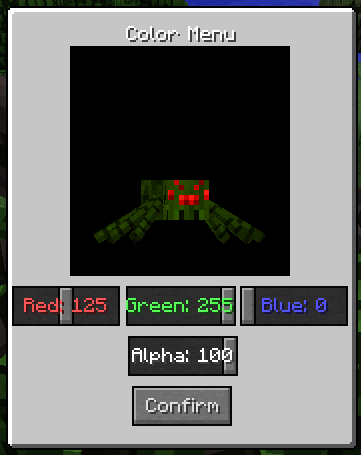