Elemental Masters Combat System Mod 1.7.10 adds attacks which you can use to defeat mobs. There are at least 10 attacks per element. Each element has it’s own creative tab and ore/gem. They also have a gem staff which allows you to travel to the corresponding elemental dimension. Each element will also have it’s own apprentice mob, which attack you with attacks in that element. Each element will have it’s own master mob, which attacks you with the strong attacks in that element. Each attack will consume a set amount of energy, an item which you can craft from energy dust. You can obtain energy dust when you kill any mob. This mod is a remake Elemental Masters but with a new and more advanced combat system. The item ‘Energy’ (With a few new energy items: Energy Ring and Energy Spiral) is still in game, but are used for something else, and are not for using attacks. The new combat system brings 2 bars – the energy bar, and the player’s skill bar. The energy bar shows how much energy you have left. When you use an attack, it consumes a set amount of energy.

Currently there are 9 attacks, each attack has 5 levels. Look at the bottom left of the screen. The top number shows your skill level. The bar below it is the skill bar. Fill it up by killing mobs and when it reaches max, you level up. The bar below ‘Energy Level’ is your energy bar. It shows you current energy. Energy is consumed when you use an attack. Currently I’m holding a mystic orb. It is the base of the whole mod. It holds your attacks. Below is what the attack slots look like. As you can see in the background, my skill level is 2, so that means I have 2 attack slots. You can also see that I have inferno in my second attack slot. To open the attack slots, hold your mystic orb and press charge (default ‘f’) How to get the energy item:

Below is what it looks like when you convert the energy you have in you energy bar to the energy item. To do so, sneak and press charge (default ‘f’) when you aren’t holding the mystic orb. Right click with energy (or energy ring/energy spiral) to revert the item energy to energy that goes into you energy bar. How to use an attack:

Below is a reference image. As you can see below each attack slot there is a letter. Press that key to use the attack in the slot. You can change the keys in the controls menu but I recommended you to keep them as is. 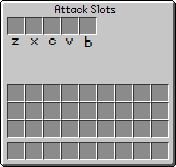 Note that the topmost six crafting recipes are to upgrade attacks, and so you can replace inferno with any attack.