Halion Map. The build consists of 6 districts, 196 buildings (all with interiors), multiple organics, 10 ships, 2 airships, and an un-numbered amount of hidden secrets. With a total of 190 million blocks, Halion is one of the largest builds that Gazamo has ever taken part in 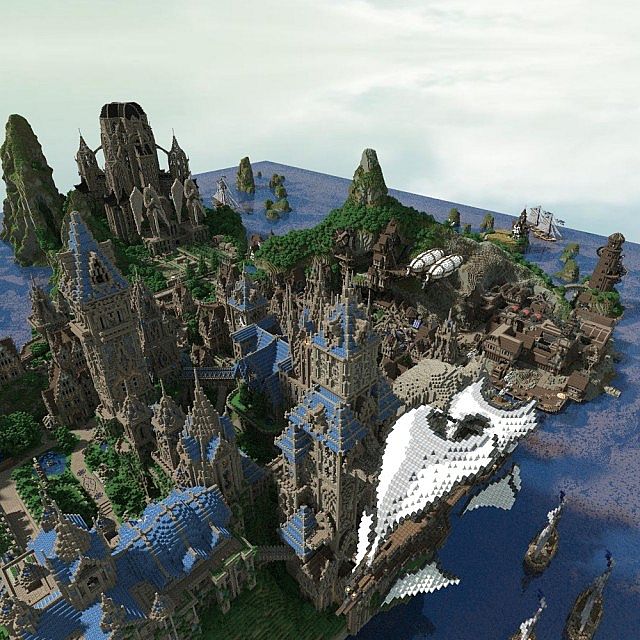 Aerial View of The Halion Bulwark Entering the gates of The Bulwark 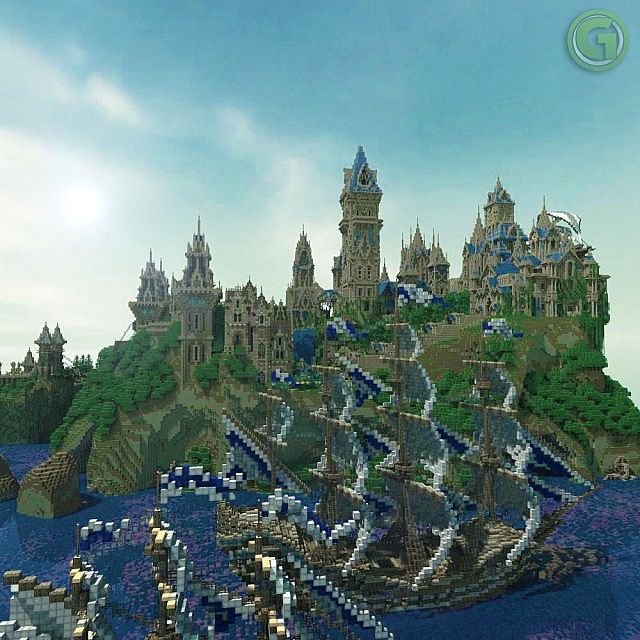 The Bulwark overlooks the pride of the fleet, The Princess Doria Thanks Sillouete Standing at the base of the Palais de Halion A boat out on patrol near the gates of The Bulwark. A view of the Halion Monastery Inside the Halion Monastery as the sun sets outside. Show Spoiler
Calix Halion, born Calix Moraeos in the year AU 162, was a second cousin of the House Patriarch and raised on the tales and exploits of Kassenias Anton. House Moraeos, famed for its great explorers and cartographers, particularly Anton, produced some of the finest maps of the world in the Age of Balance. It is said that these very stories of past legends and explorers were the catalyst that inspired Calix to migrate from the comfort of Nobility to the open seas as a Privateer, navigating, exploring, and exploiting the waters between the eastern edge of Monas Roth and the western coast of Aloreh.

It was during this time that Calix slowly made a name for himself. Whether accurate or true, a chance meeting with the Thieves’ Guild serves as the first documentation of the man approximately a hundred and eighty years after the second calling. Likewise, this event is the first mentioning of the family name Halion, a name Calix assumed for himself as he temporarily abandoned ties to House Moraeos. Halion went on to become one of the plane’s most successful privateers in the years to come, making a significant amount of payout while stockpiling goods bound for Vrovona in the beginning of the Great Ithero-Vrovona Conflict of AU 186. During this time, Halion contracted pirate ships out of Valinta and the northern coast of Ar-Selukk to raid Itheri ships, furthering his ties with the Thieves as well as increasing his own rapidly expanding wealth.

The Alor Government, who at the time served as the major mediator between the two warring nations of Ithero and Vrovona, eventually discovered Halion’s actions and privateering. Initially condemned to death, Halion was pardoned after some choice words and the discovery that Calix Halion and Calix Moraeos were one and the same.

Calix was not heard from again until AU 192 with the founding of Halion Island, which shares his name, near the end of the Great Ithero-Vrovona Conflict. The island, located south of Monas Roth, is notoriously hard to navigate to as it is surrounded by treacherous outcroppings of stone. Though the waters are ideal for shipping due to the depth and premiere location between three nations, the island remains well protected due to strong currents and the unpredictable topography that prove a challenge to even the greatest of captains.

It was also in this year that Calix was said to have taken the Daggerlander Fara Gower, the daughter of a Magister, as his wife. This was shortly followed by the birth of his first son, Haegon.

Over the next ten years, Calix established Industry on the island, primarily employing past crewmates as well as notable engineers from Monas Roth who had migrated to the island looking for work. During this time, the Industry flourished financially. Halion Island became a large exporter of Lapis with increased mining efforts, particularly catering to the Alor Nobles who often desired the blue rock. Likewise, the Island workers excelled in the creation of textiles and metal tools but avoided the production of weaponry to avoid conflicts with nations in its early years. Despite financial success, the island became overrun with pollution and crime as overpopulation rapidly became a problem. Thus, the decision was made to mold what had previously been a small settlement into a proper city once relations with several nations had been established.

It was shortly after this initiative that Calix smuggled a large cache of technology out of Monas Roth by impersonating an official of the nation. This serves as perhaps the most famous tale of Calix Halion. With a sudden abundance of tech and an expected embargo from Monas Roth, Calix Halion officially founded Halion Industries on his island in AU 203. Halion Industries flourished in the following years, crafting metal tools, exporting an abundance of diamond and lapis while importing vast amounts of redstone. The settlement grew and prospered and Halion Industries became a large work farm for engineers as those hoping to start a new life flocked to the Island from all corners of A’therys.

The Industry had its first hiccup in AU 218 with the sudden and untimely death of Calix Halion. Having returned home with an unknown illness, Calix passed after two long nights of suffering. It was widely agreed upon that Calix had been poisoned by a Rhumon of Umtrahd Ruul, though some whispered that it was in fact his wife that had murdered him. Regardless, the former solidified itself as popular opinion, making for a much more interesting tale.

With the death of his father, Haegon Halion became the second Chairman of Halion Industries in AU 218 at the age of twenty-six. Unlike his father, Haegon was notoriously ruthless, sparking an age of agony and anguish for the denizens of Halion Island. Though crime rates remained low, the death toll climbed as working and living conditions plummeted. Additionally, Halion Industries began production of weapons to sell to conflicting nations. This included the production of warships and even airships once the costs could be supported and the technology bought. As a direct result, Halion Industries received a cease and desist from the Alor Government and was forced to end such production, though it is rumored that the Industry continued sales behind closed doors on the blackmarket, increasing profits tenfold.

Under Haegon’s iron rule, the engineers of Halion Industries began construction of the Halion Bulwark, a heavily fortified area of the city to protect from potential outside threats. Most assumed this was a result of Haegon’s growing paranoia and his fear that Monas Roth would oppose him with force after Halion received its second business embargo from the Daggerlanders for corporate espionage and uncouth business practices.

Alongside the Bulwark, construction of a larger market began. Before it reached completion, the market district had already become a hotbed for activity, both legal and illegal, serving as a model for a true free market. It was during this time of construction that Halion Industries took a strong stance against the drug trade that seemed to originate in the underbellies of Aloreh and Ar-Selukk, not because Haegon believed it was immoral, but because the influence of the product led to drastic inefficiency from the workforce and populace.

Despite widespread criticism for its living conditions and rampant pollution, Halion Industries continued on into prosperity. It wasn’t until AU 248 that High Mediator Carter Westwind of Aloreh intervened for the sake of the Halion citizens. The intervention triggered a small revolt by the people that culminated in Haegon Halion throwing himself from the Bulwark in a fit of hysteria. Haegon’s eldest son, Oren, born in AU 222, inherited the role as third Chairman of Halion Industries, ushering in a new age for both the Island and its people.

As Chairman, Oren quickly established a new police force and several immigration laws to counteract the growing population. Perhaps his most significant deed was the commissioning of plans to construct a great Cathedral, which would serve as a place of learning and an answer to the demands of the peoples of the island. It has since become a wildly sought area of education, comparable to the libraries of Ossus or the Spires of Lyceum, though with no magical trainings. Instead, the Cathedral focused on economics of the plane as well as general education, peeking the interest of both the Merchant’s Guild and Blackstone Trade and Sundry.

With the completion of the Cathedral, Oren took it upon himself to restore the island to its once green state, hiring a young pupil of the Arcane College to conduct such work in AU 249. Nolur Dashod, a Loghec and agent of Baphus, spent the following months reclaiming much of Halion Island’s lost wilderness. His work was more effective than originally planned and the Island has since been overgrown barring the most focused area of pollution.

It was from then on that Oren Halion brought Halion Industries into the Golden Age of Trade. Today, the Halion Bulwark is considered a bastion for free rights and free trade, protecting the citizens of the small island as if they were blood. Though the city has no large standing military force, most of its trading vessels are equipped to be hot swapped for wartime should the need arise. Likewise, the citizens all serve as part of a standing militia that can call upon both the men and women of the island. Furthermore, taxes are notoriously low as the citizens of Halion and its government have since worked in unison to create the premiere working environment. Private schooling and land within the Bulwark exist as the most expensive commodities of the island.

Halion Island is considered to be a disconnected city, governed by itself, though it does pledge fealty to the High Mediator of Aloreh in required times. This has been a rare occurrence as the current Alor government avoids calling on the people of Halion to avoid conflict with Monas. As of today, the embargo remains in force unless the technology and subsequent profits from it are relinquished to the Daggerlander Leadership. Oren Halion has refused such demands, stating that the original tech is no longer in their possession and that the currently used tech is simply an expansion upon it.

The year is AU 258. Halion Industries has been in existence for roughly fifty-five years and its third chairman, Oren Halion, still resides over the company and city to this day.